The Things to Draw Journey 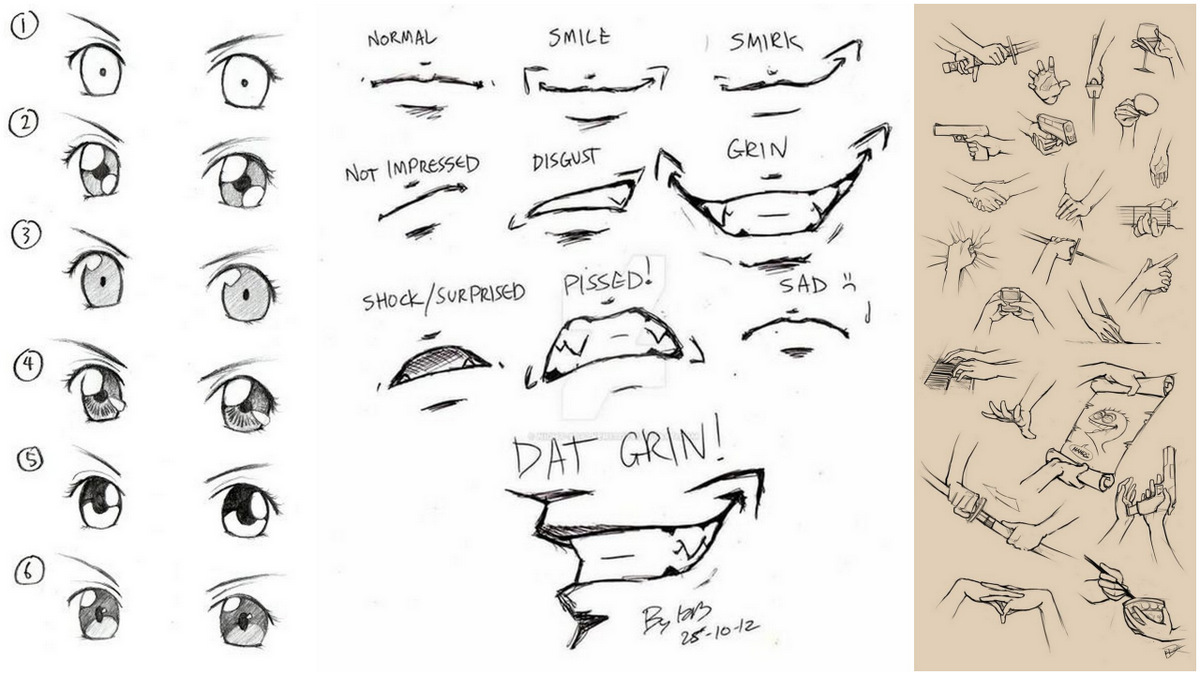 Manga are comics originally created in Japan. Like a all comics, these manga have different stories that are told in different panels across the pages. Of course, there are different stories with different genres such as action, science-fiction, horror, comedy and romance along with a whole lot of other sub-genres included; some are exclusive to Japan while others have originated from this country and rapidly spread across the globe.

What sets manga apart from Western comics is the style of drawing. Manga characters are usually defined by their big eyes. Some have sharper features while others have softer and almost a doodly-effect.

You can learn how to draw like a professional illustrator too and you`ll soon the join the fan base that produces fan-art. A lot of fans around the world has adapted the Japanese anime style of drawing, so you can too. You can create simple drawings and doodles in this design language to start with and progrees towards more complicated settings afterwards, you can even start your own small comic book.

Guides & Tutorials on How to Draw Manga

1. HOW TO DRAW MANGA EYES

Eyes are the most important feature of a manga character. They are often bigger than the rest of their facial features. The way the eyes are drawn also gives the character a different, defining  appearance.

2. LEARN HOW TO DRAW EMOTIONS 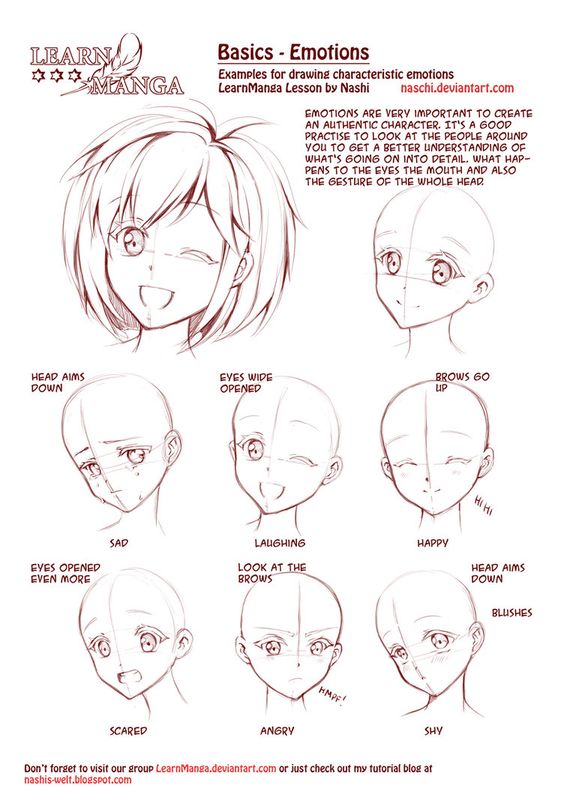 Since comics do not move, an illustrator has to show what action is taking place by drawing them. Emotions can be drawn to let readers know what the character is feeling at that certain scene.

This is a step by step tutorial on how you can draw a face. This is one of the most basic looks to help start you off.

4. HOW TO DRAW HANDS GRIPPING AND HOLDING

One of the most challenging part of drawing a manga character is drawing the hand. Usually, it should be close enough to the human hands. You can use your hands as a guide, but you can also take a look at these when you’re drawing some hand actions.

Wings aren’t necessarily part of the human body; but a manga could be a fantasy story. It could be great to learn different styles of wings for different creatures. Some of these even work for normal birds.

6. HOW TO DRAW FEMALE HAIRSTYLES 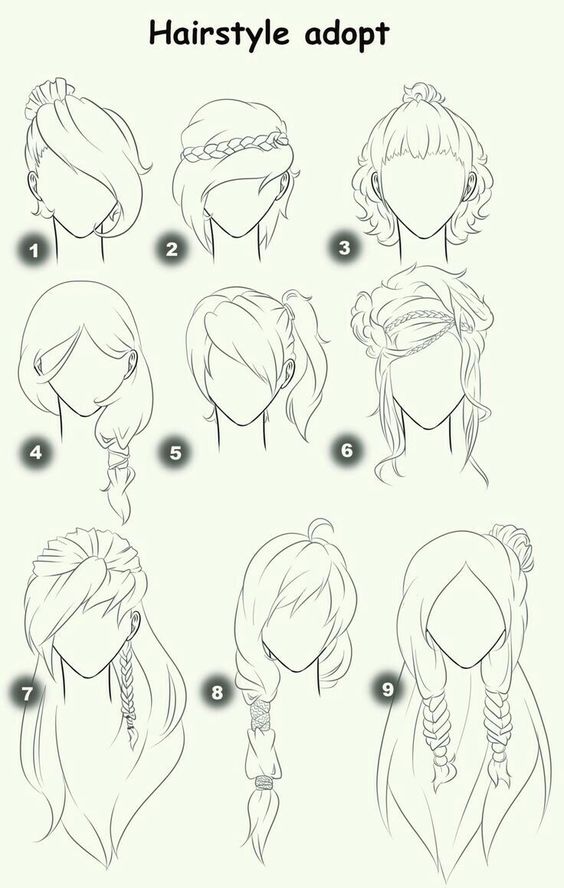 The hairstyle of the character gives a character depth that could be read as background, the way a girl ties her hair could speak of its culture and ethnicity. Female characters often have the most intricate hairstyles. You can experiment with braids, ponytails, waves and even hair length to give them a more unique appearance.

Each illustrator draws the eyes differently. The level of their emotion also helps create in creating an authentic eye look.

8. HOW TO DRAW WOMEN SITTING DOWN 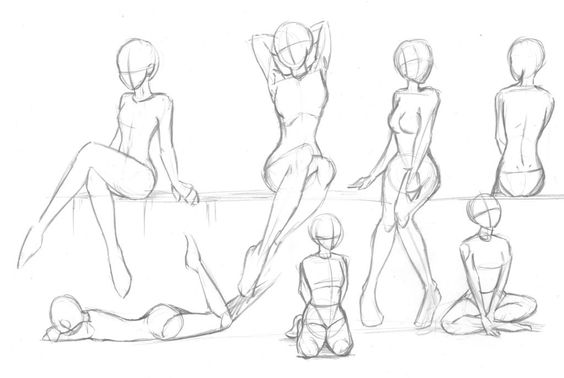 Standing up is a basic position. But you also need to learn how to draw characters in different positions, especially sitting down. Here are some reference guides that works when you’re drawing a female character. 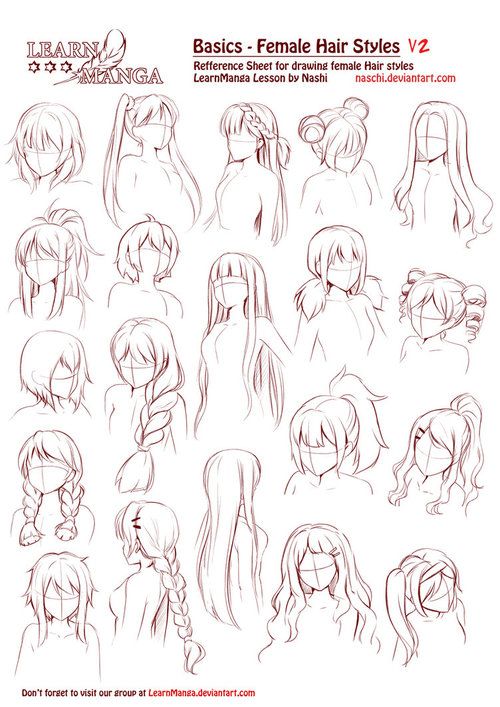 If you aren’t that familiar yet with drawing hair, it’s good to start with the most basic ones. Then you can start experimenting more as you grow accustomed to it.

10. HOW TO DRAW MOUTH – EXPRESSIONS 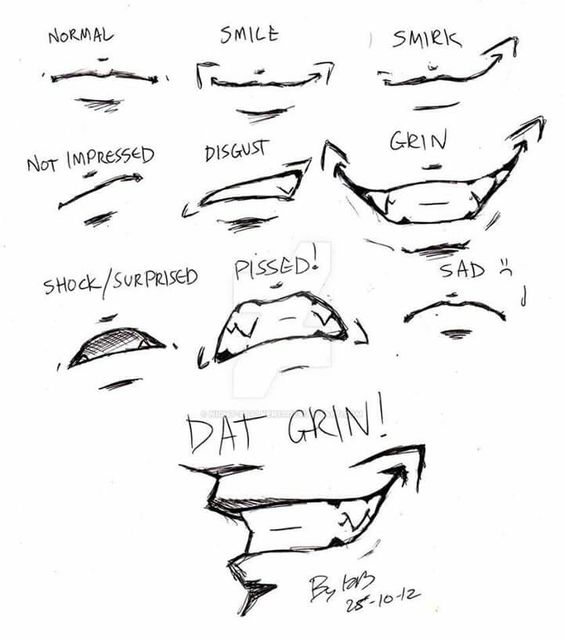 Apart from the eyes, the mouth will also tell what the character is feeling.

11. DRAW A MAN THROUGH THE YEARS 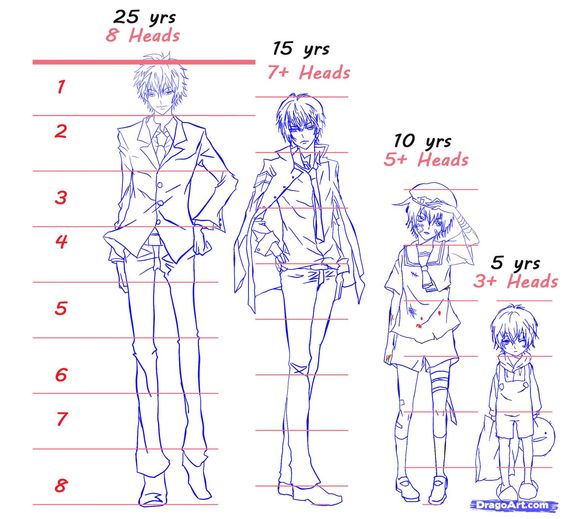 Sure enough, you will require diverse characters in your manga stories. Here’s a helpful guide on how you can draw a male character starting from when they are children to when they become adults. 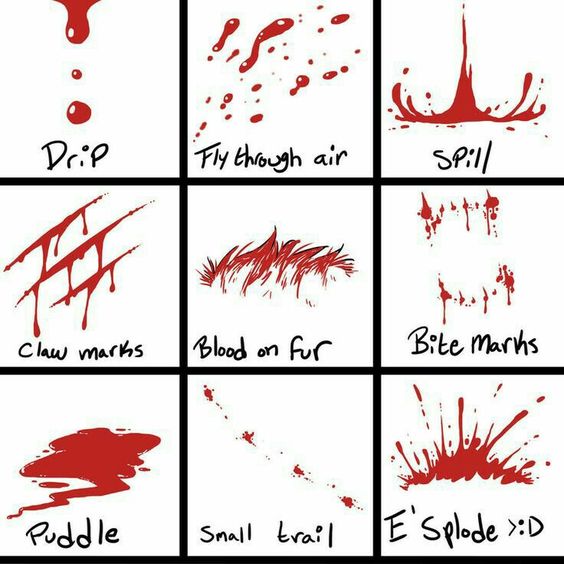 Liquids are rather hard to draw since they don’t have forms. Nonetheless, this guide will help you when you’re trying to capture blood or various other liquids on your manga. 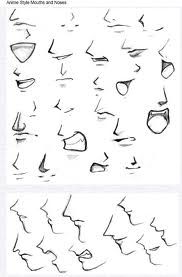 The nose of manga characters are not the same with the human nose. It would be good to start learning how to draw this detail from the front to the side to help you know how it looks like when you have drawn a mouth as well. 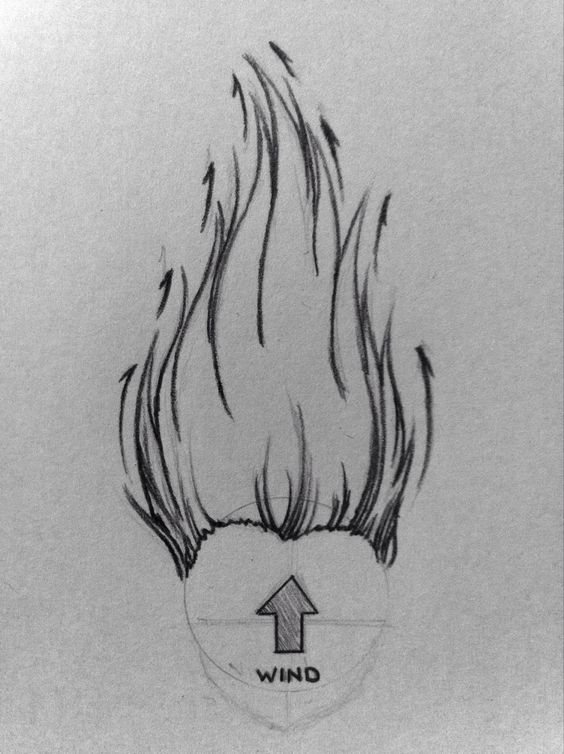 Hair motion is important. This helps the reader know when a character is moving. Again, since comics are stationary, how you draw the picture will help readers understand what’s going on. 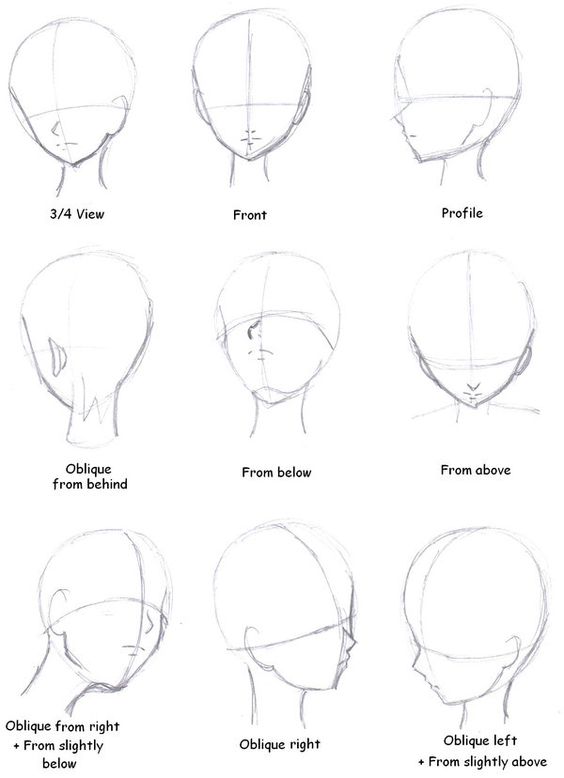 Drawing a manga is just like taking a picture. There will come a time that you will need to find the best angle for your character. 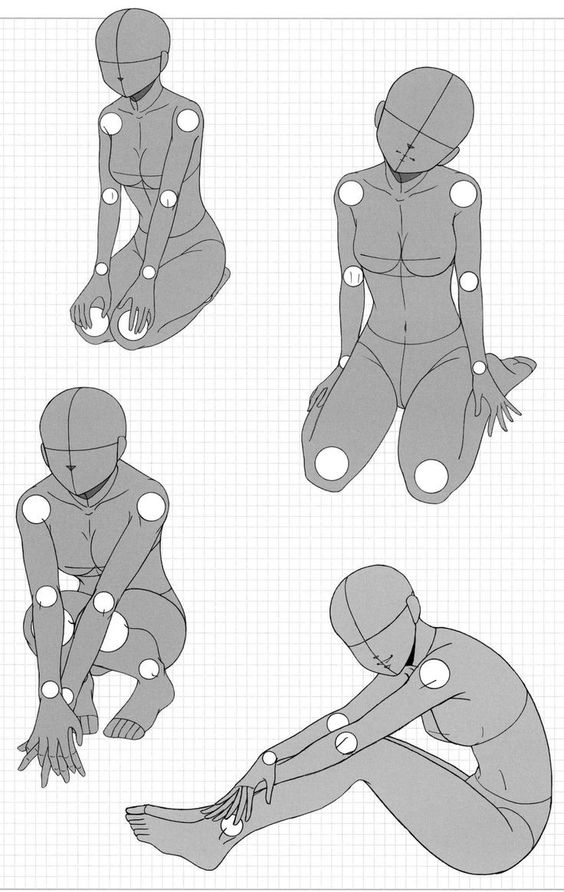 Here are other basic positions you will need to know so your character will have a more diverse movement.

Sure enough, the most basic part of drawing is learning how to draw the body. Doing a sketch and body guideline to start with would be the best solution. Circles represent the joints. Then you can connect and create muscle figures through lines. 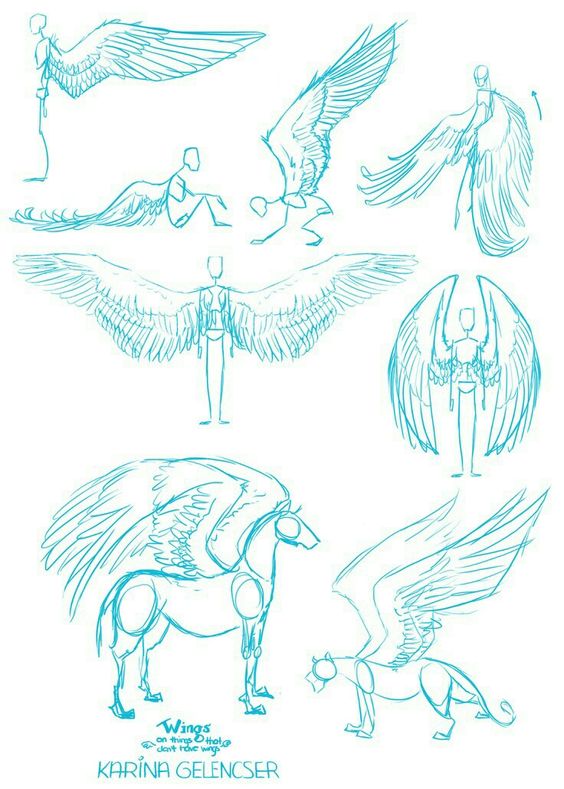 Again, you may need to draw some winged creatures in the future, the realm of creativity is limitless and one of the most common dreams world-wide is the one of flying, it might be worth embracing in a story.

18 Step By Step Tutorials On How To Draw A Bunny

15 Tutorials and Guides How To Draw A Zebra

Learn How To Draw A Deer – 15 Easy Tutorials and Drawings

15 Tutorials On How To Draw Tinkerbell

101 World`s Most Easy and Cool Things to Draw

17 Magical Mickey Mouse Drawings That You Will Simply Love

17 Spectacular Tutorials On How To Draw Animals

ThingstoDraw.info aims to nestle everything drawing related, from traditional painting drawings up to state of the art digital conceptual art, paintings, adult coloring books and all the possible utensils of greatness used in between.

101 World`s Most Easy and Cool Things to Draw

15 Tutorials And Guides On How To Draw A Lion